I’ve been hearing a lot about Midwife to Destiny, part of Decadent Publishing’s Ubuntu line. Nana Prah stops by today to tell us about her recent release. 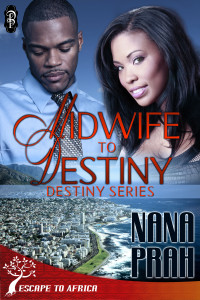 About Midwife to Destiny

Ghanaian nurse Aurora ‘Ora’ Aikins never expected to find the love of her life while on vacation in South Africa. Engaged to another and believing that love has no place in her life, she returns to Ghana, and puts duty and honor first.

Three years later, Dr. Jason Lartey still can’t get Ora out of his mind or his heart. After learning she never married, he takes a risk and moves to Ghana hoping to rekindle what they started. His sudden appearance in Ora’s Emergency Department sends sparks flying all over again.

They’re in the same country, working in the same hospital, and together but distance creeps between them. Can they make their destined love one for the ages?

Nana Prah was born in Ghana, West Africa, raised in the US and currently resides in Ghana where she loves her job as a writer and nurse educator. She has been writing since she can remember (in her journal) and has been an avid reader of romance novels since the eighth grade. She has finally been able to utilize the years and years of inadvertent research into writing her own romance novels where love always conquers all.

Enjoy the following excerpt for Midwife to Destiny

Ora focused on putting one foot in front of the other as if she were a one-year-old learning how to walk. After turning the corner and seeing the back of his head, she froze. She would know that head anywhere. He’d grown his hair out a little, but his adorable, Will Smith ears gave him away. Initiating the process of pivoting and sprinting out of the ED unnoticed sprang to mind when he turned around and his gaze caught hers.

The air became charged with tension and neither of them moved. Her heart threatened to pop out of her chest with the force of each beat. The nurses stood between them, looking back and forth as if they watched a tennis match. They didn’t bother to hide their expressions of curiosity.

They’d never seen Ora behave in such a manner. Not cool as a cucumber super nurse. Like herself, they kept looking at the new doctor just because of his tall, broad-shouldered, gorgeous stature. The past three years had matured him, adding a few lines around his eyes and the new feature of a goatee with a moustache changed his countenance a little. But otherwise, the same man she’d met three years ago, at least in the physical sense, stood before her.

After an eternity, Ora snapped back to attention. “Akwaaba, Dr. Lartey. Welcome to the ward.” Madam Professional stuck out her hand for a handshake.

Her words seemed to drag him out of his own stupor. “Uh….”

She had rendered the man speechless. Ora’s gracious nature—that’s what she blamed it on, anyway—took pity on him and she touched his shoulder. The contact sent sensual awareness through her and she recoiled her hand.

“Hello, Aurora. Please forgive me. It’s just that I’m a little surprised to see you.”

“Not as much as I am,” she muttered, attempting to squash both the joy bubbling up inside of her at seeing him again and the overwhelming sadness of what she’d been missing for so long.

“I didn’t expect to see you here. It’s a surprise to me, too.” She tried to smile, but it came out contorted, as if she’d been able to have a painful, rocky bowel movement after being constipated for seven days.