Q&A with Taryn Kincaid and In From The Cold 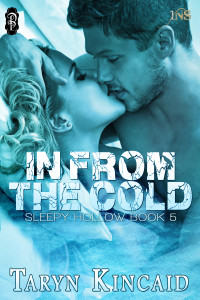 Thanks for having me in to guest blog with you, Libby!

1. Your hero, Spook, is related to some of the other heroes in your Sleepy Hollow series. What makes this family so darn hot?

The first thing to know about the Raines guys is that they are fire-sex demons..That pretty much makes them hotter than sin. And sometimes they have special characteristics that make them even more swoonworthy.

Bhyrne Raines, the hero of HEAT WAVE, is an enforcer for the Queen of the Succubi. During smexy times, he can focus on, meld with and enhance his lover’s psychic aura, so that aside from the physical, he’s right in there body, mind and soul. Makes for toe-curling,  mind-blowing enjoyment. When we meet Bhyrne, he’s starting to go through the all-crazy, all-the-time fire-sex demon mating frenzy that is breedspawn.

And then there’s Spook, Max’s cousin and Bhyrne’s brother, who doesn’t know he’s a demon or that he has any family at all. He’s a secret agent, though, and he’s got mad-crazy martial arts skills, including the ability to whiff from one place and rematerialize some place else.

One thing they all have in common: They’re all most definitely swoon-worthy!

2. Your heroine, Geneviève, is a demon hunter. Do we get to see her in action in In From the Cold?

Well, that all depends on what kind of action  you mean. [winkwinkwink] When we first see her, as you can see from the excerpt, she’s creeping down the hallway of a hotel in Paris, hot on Spook’s trail. But when she gets inside his room, some surprises on in store!  Let’s just say Spook’s like nothing she’s ever encountered before.

3. Can you give us any tidbits about your current work(s) in progress? Maybe another Sleepy Hollow on the horizon?

New Sleepy Hollows are always somewhere out there on the horizon. Have an idea for one, but I haven’t yet started it. I’ve contracted a story for a secret Decadent Publishing line that hasn’t  launched yet. It’s finished and edited and in the galley stage. Look for it in 2015! And I’m currently working on a promised story for Fated Desires, also possibly sometime in 2015. Have a few others in the works, but haven’t put down any words yet!

4. Just for fun: Book or movie you are most looking forward to coming out in 2014.

The book I most looked forward to was The King by J. R. Ward, also looking forward to  Nalini Singh’s new one. Movie: Divergent. Haven’t seen that one yet!

IN FROM THE COLD

Blurb from In From The Cold

Spook Raines is a burnt-out spy who doesn’t know he’s a fire demon with a twin in Sleepy Hollow.

Geneviève Mortimer is a will o’ the wisp who hunts demons to ease the pain of her troubled past.

When Madame Eve brings them together for a torrid 1Night Stand, will they be able to come in from the cold at last?

Excerpt from In From The Cold

Geneviève Mortimer crept down the quiet hotel hallway, careful to bank her glow…at least for the moment. She’d sensed the presence of a demon on the floor, but something seemed off about the male’s aura. A weird lack of evil, like an impenetrable force field surrounded his consciousness, his psyche. As if he thought he were…human.

Had he been brainwashed? Drugged? Raised by gypsies? By wolves? Wait. No. Scratch that last one. She didn’t get the were vibe at all with this one.

No matter, as a will o’the wisp and a POLO, Protector of the Legion of Shadows, tasked with watching over humankind and keeping the unwary safe from visitors from the demon realms to the human plane, she lured the black-souled to their demise. Going all shine-a-light and sparkly until the evil ones fell under her spell and followed her anywhere. She needed to find this guy. Pounce first, beam a little hypnotic wattage, ask questions later. Take him out before he did any harm. To humans, or innocents like her parents.
She sniffed. Getting warmer. Closer to the demon’s room. What would she find behind his door?

Ignoring the do not disturb sign, she jiggled the handle. Locked. But the absence of a key card wouldn’t be a problem for her, not with her brand of talent and the magick lock picks in her pocket. She got the door open in seconds and slinked into the room, masking her radiance, keeping to the shadows.

Cripes. This sort of thing never happened to her. I’m a demon hunter, damn it. She remained professional always, despite her ditzy, scatterbrained reputation. Did her job. And did it well. She’d fooled even her closest friends, those who didn’t know about her role as a POLOS and didn’t guess the half of it. Those who thought she slut-flitted around the world searching for mischief, adventure and, most of all, pleasure, like some sort of fickle, commitment-shy, well, yeah sure, okay, will o’the wisp.

Buy In From The Cold