How to make a vision board 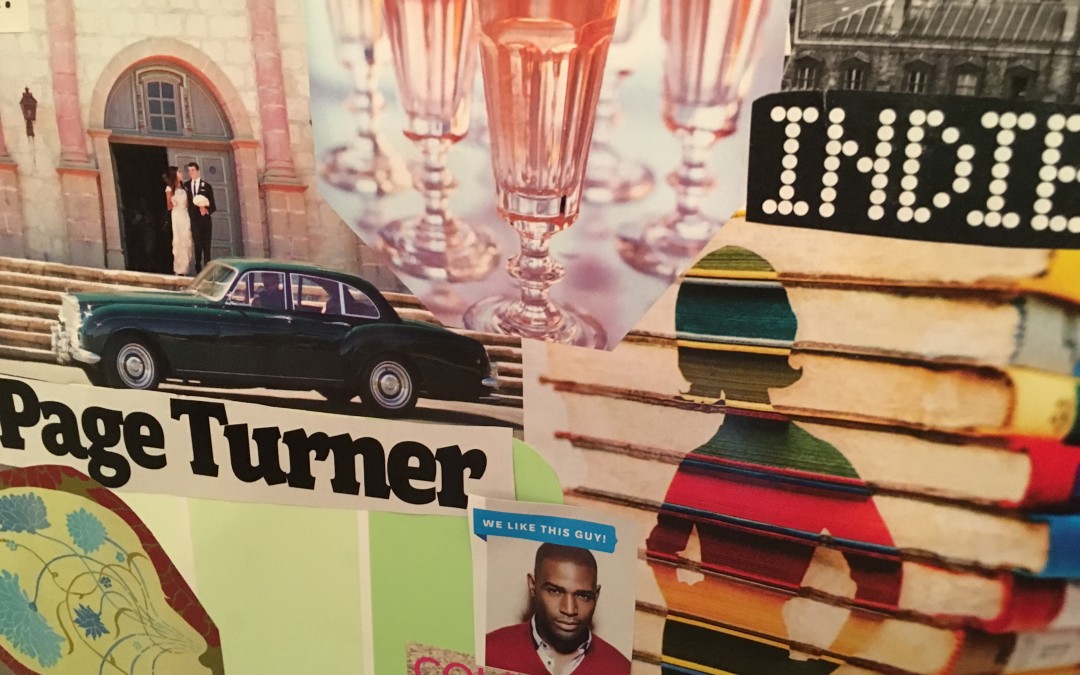 Every year around the start of the new year, in lieu of a list of resolutions, I make a vision board instead. A vision board is a collage of pictures and words cut out of magazines or other printed materials and glued together on a big piece of paper or cardboard. I hang the board near my desk and it serves as a point of inspiration during the year. I like that I don’t always know why I might be putting a certain image or idea on my board, but by the end of the year I can look back and see certain patterns or things have come to pass almost like they were predicted by my vision board. like the year I had a photo of chocolate croissants on my board and in August of that year a free (and fabulous) croissant making class fell into my lap. The last few years as I’ve made my board, I’ve had enough stuff to fill two and they vary in tone. One turns out to be for my “regular” life, and the other turns into what I call my “Libby board” and it guides my writing life for the year. 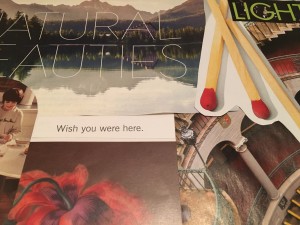 The process of building the vision board actually really closely resembles my writing process. The first step of building a vision board is collecting the raw material–magazines, catalogues, falling apart books. In my writing, this is the time before I ever sit down at a computer, where ideas for characters and stories are floating around in my brain and I might capture a few for later. The second step of the vision board is to go through and grab all the images and words that you think you might want to include. This where intuition really takes over. You don’t have to know why you’re choosing something in order to put it on there. It will become clear later. Who knows why you like that picture of a lobster? But it calls to you and you snip it out, laying it on the pile with all the other bits and pieces. This is the first draft for me. The first draft is where I write as quickly as I can, without stopping, until the rough form of the story emerges. The third step of making the vision board is to sort out the piles of images and words and figure out what you want to place where. Not everything ends up in the final board, and the order or design is fluid until you start to glue. That’s the revision process, moving stuff around, paring stuff away, until you start setting certain things in stone, and the rest of the picture, or story, coalesces around them. The last stage of the vision board is gluing everything else down until you have a coherant whole. In my family, we often share our vision boards and talk about what patterns we see in them or what we’re hoping to get out of the year. That’s the stage where the book is pretty much done and sent out into the world, to a beta reader or an editor. Of course, a book often has many more passes of revisions and changes before it gets completely done, but I find approaching the beginning of the book with the same looseness and openness to chance and serendipity that I approach making my vision board really helps jump start my creative process.

What’s great about vision boards is that they’re temporary. I have mine up for a year, and then it comes down, ready to replaced with something new. Such is the life of a book. It gets written, and then another idea pops up and takes over. As I get older, the more I recognize, and am comforted by, the cyclical nature of life. It means that things are constantly being renewed, that we always get another chance, that growth and change are always present. It gives me hope.