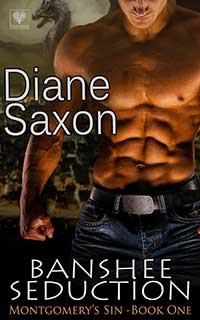 My prolific friend Diane Saxon has another new release, with the unusual title (and premise) of Banshee Seduction. I’ll turn over the blog for her to tell you more about it.

Sweet, shy librarian Ginny has a problem. Whenever passion strikes, so do the weeping, wailing voices in her head. Being half banshee, she’s already run screaming from the underworld and her female relatives, believing love will find a way with patience and faith on planet Earth.

The trouble is, humans just aren’t man enough, and every time Ginny shows interest in a male, she makes him bleed. It’s going to take more than just a simple human being to get past Ginny’s defenses.

Matthew, “The Dane,” fullback for the New York Chameleons, knows the moment he meets the little fireball that she’s his mate. For two hundred years he and his dragon have waited for a female capable of setting their world on fire. Problem is, he doesn’t seem to be able to stop her from going up in flames long enough to prove he’s more than man enough for her screaming banshee.

Will Matt ever be able to convince Ginny she’s his mate? And will Ginny get Matt alone long enough to let him appreciate her pyrotechnics?

He had no idea if he was going to survive. She drove him higher than he’d ever been before, and he’d only managed to get his hands on her and kiss her. The sweet smell of her skin, the soft touch of her fingers—umm, well—the yank of her fingers. Desperation was evident in every move she made, every sound she emitted from her perfect, plump lips.

He cruised his mouth back up the length of her neck, enjoying the heavy weight of her perfumed breasts in his hands. He sucked in the silken skin over the racing pulse at the base of her throat. His tongue smoothed over the flesh he held in his mouth. He felt the groan reverberate through her throat and flicked his thumb over her taut nipple.

With a sharp jerk, she wrenched her fingers from his hair and grasped his shoulders.

Thrilled at her response and keen that at last he seemed to be going to get the chance to explore his mate, he repeated the move with his thumb, stunned she hadn’t yet exploded into a profusion of fireworks.

The firm grasp of her fingers tightened on his shoulders like steel clamps. She might be a little thing, but she sure was undeniably strong. He nipped her neck in retribution. She flung back her head, making him flinch at the loud thunk as her skull connected with the heavy leather-bound books behind her.

He reared his head back and stared at her. “Already?”

Bright puce flooded her face, her lips parted, and a small keening wail escaped her. Wow, she really was responsive. Her lush breasts heaved beneath his hands, and the thrum of her pulse escalated to join the rhythm of his own heartbeat.

She gave him a firm shove. Off balance, he reeled backward into the opposite shelf. His hand caught a row of books and sent them careering to the floor as his lunchtime leisure break took off in the opposite direction, tugging her clothes into place and screeching at whoever hammered on the front door.

Her voice impatient, the fast clip of her heels echoed against the stone floor as Matt glanced at the fallen books scattered all around. He hunkered down and picked one up.

The Elusive Orgasm—Have You Got Her Coming or Going?