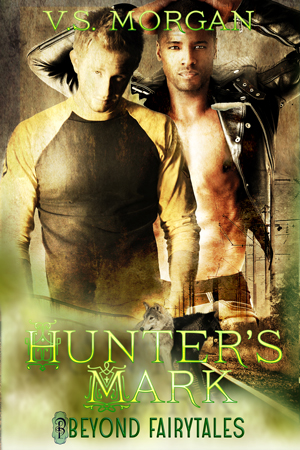 My assigned story was Grimm’s “The Skillful Huntsman.” While some authors were assigned stories with only a few paragraphs, my story was a page long single spaced. So my biggest challenge was figuring out how many elements of the original tale should be reflected in my story but making it unique enough to not being a straight re-telling.

I think I found a nice balance. I don’t think Grimm ever envisioned gay wolf shifter assassins! Lol! But elements such as the huntsman, his marksmanship, the dog, the pottery/pottery stand, and other touches were included.

I read the original tale a number of times, confirmed my memory about the Eugene Saturday Market, and double checked my ‘street’ word spelling.

I recently contracted a m/f multicultural western foodie romance called Sam’s Temptation, sequel to The Gift, although it can be read as a standalone. I believe it will be released in December or January.

My current WIP is actually a sequel to Hunter’s Mark. The working title is Rex’s Mate and is centered on Hunter’s smartass best friend, Rex. I really loved Rex in HM and am excited to bring him back with Hunter and Casey as secondary characters.

Sam followed Jared out to the drive and wiped his hands on his jeans. He hadn’t been this nervous since the eighth grade when he’d had a huge crush on Becky Sanders.

Yeah and remember how well that went down.

He released the breath he’d been holding as Gabriela emerged from the SUV. She was casually dressed in a T-shirt, jeans, and purple Converse sneakers. Her honeyed skin and unruly curls were radiant in the afternoon sun.

She reached him first. He extended his hand for a shake. “Gabriela.”

She ignored it to press in for a hug, which he returned stiffly, hyperaware of her soft, warm body against his fast hardening one. Seemed his body hadn’t forgotten her either. He clenched his jaw as vanilla and jasmine wafted from her hair. She was considerably shorter without the heels, and hell if he didn’t love the greater height difference.

All too soon she pulled back, her hands still at his waist as she beamed up at him. “Samuel.”

His name sounded exotic and sensual with her slight accent.

He cleared his throat. “Sam.”

“Sam,” she said softly, and his mouth dried in response to the husky tone. The woman could make financial reports sound X-rated with that voice of hers.

I start with a story idea and go directly into mapping out my main characters – usually a few pages each. The characters help me draft a rough plot outline. While I generally follow that structure, I can pants or adapt from there as inspiration strikes.

I wish I could write every day. Working full time (and sometimes overtime), being a mom, and taking care of the day-to-day stuff takes large portions of my time. If I write too late at night, my brain doesn’t shut down well. So I write in the early evening, on the weekends, and on vacation days.

I love the Reese’s Peanut Butter Cups shaped like pumpkins the best but pretty much like anything with chocolate.

Artist Casey Smith lives a quiet life, under the radar of his enemies, until one fateful night he loses control and the astonishing image of a wolf racing down a suburban street splashes all over social media.

Realizing his latest assignment violates those rules, the hunter activates Princess Protocol and the assassin becomes the protector. Red hot attraction flares between the hit man and his former target. Can Hunter resist the sweet shifter in his care?

He stepped closer to Casey’s stall but stumbled over something small and furry. The toe of one Birkenstock caught on a clump of grass as he attempted not to trample the little beast, and he ass-planted with said beast jumping onto his chest to give him a broad doggie smile.

His buddy laughed piss-your-pants-hard in his ear. Fuck a duck.

The target he’d worked so hard to observe remotely sank to the ground between his sprawled-out legs, peeling the tiny hairball off his chest and setting it on the ground.

Big blue eyes fringed with long, pale lashes scanned his body while strong yet gentle hands moved over his ankles and legs, searching for an injury. Oh, a toucher. His wolf basked in the tactile attention. His breath hitched as those hands glided past his knees and skimmed his thighs.

Damn, he needed to get laid after this assignment.

“Oh, my, what a li’l sweetie. Look at those freckles! I wonder if he’s got them everywhere. I’d like to lick them,” Rex crowed in his ear.

The other man chortled. “Possessive, much?”

He inhaled deeply, only to be slammed with the force of a Mack truck. Strawberries on a warm summer’s day and fresh-cut grass—shit, his target smelled delicious. He took another breath, and his brain reeled. He’s a wolf shifter, too? Fuck.

Casey’s brows furrowed. “Where are you hurt?”

Casey returned the smile, his wide and high beam combined with sparkling eyes. Hunter stared as warmth wrapped around him like a blanket. He had no ammo against such a happy, open expression. The guy freaking glowed.

Available many locations including:

V.S. Morgan has lived all over the US but calls Minnesota her home now. Her family includes her hubby, son, and a menagerie of pets.

She’s been writing stories since she could hold a pencil and dreams of happily ever afters – even for two hot men – because love knows no boundaries. V.S. writes MC/IR contemporary, paranormal, and suspense m/m and m/f with heart. She plans to branch into fantasy and sci fi romance, as well.

V.S. is a GLBT ally and a lifetime contributor of The Trevor Project.