Romance writers talk a lot about alpha men and beta men. Alpha heroes tend to be manly men, Navy SEALs, firefighters, cops, werewolf pack leaders, billionaires, who are arrogant and possessive and who would be horribly unlikable except for the fact they they fall for the heroine, and fall hard. Beta heroes are quieter, maybe a teacher, entrepreneur, writer who doesn’t need to machismo to get a woman’s attention–his dreamy eyes (sometimes behind a pair of glasses) and sensitivity will do that for him. I personally like to read–and write–about men who are beta on the outside, and turn alpha in the bedroom. What’s sexier than finding out the cute guy with the good manners turns out to be amazing in bed, and discovering it because you took the time to look beyond the obvious?

Alpha heroes can be attractive, too, but too often they are just jerks with huge bank accounts and I lose interest in them before they can be redeemed by the heroine. 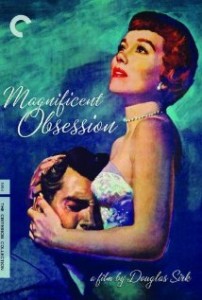 I was reflecting on the nature of alphas and betas when I was re-watching a pair of old Rock Hudson movies. In Magnificent Obsession, Hudson plays a quintessential alpha–the rich playboy who inherited his business and wealth instead of earning it and whose careless way of going through life indirectly results in the death of the heroine’s husband. Through the course of the movie he goes from unlikable jerk to sympathetic romantic lead, since he falls in love with the widow (after causing her to go blind!–this is a Douglas Sirk-directed 50s melodrama after all), gets rejected by her, and has to reform himself and become a doctor like he’d once set out to be.

Exactly a decade later (1964) Hudson stars with the lovely Doris Day in Send Me No Flowers, a straight-up comedy (most of the comedy is provided by Tony Randall as their next door neighbor) in which Hudson and Day are married. He’s a terrible hypochondriac and he erroneously believes he’s dying, so he spends most of the movie looking for a replacement husband for himself to take care of his wife after he’s gone. He decides, against his better judgement, on her old college flame, a cowboy-boot wearing, Jaguar-driving oilman named Burt Power. Anyway…I’m getting off topic. This movie is hilarious and you should watch it sometime. 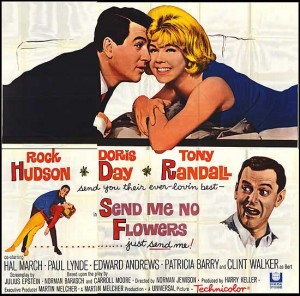 My point is Rock Hudson can play both the alpha and beta because he’s got that arrogant streak and pretty-boy looks, but enough self-awareness that he can make fun of himself, too. I prefer him playing the beta–it’s fun to watch a strapping, handsome guy worried that he’s going to die from a little indigestion. Betas aren’t weak, but they are more human, and ultimately, for me, sexier. Do you have an alpha or a beta preference?

Since neither of those movie posters really show Rock off to his best advantage, here’s a bonus photo to brighten your day.