Please welcome Alissa Baxter, here to introduce her novel, The Blog Affair. Since we all live a portion of our lives online these days this book seems particularly of the moment.

My contemporary romance with a chick lit flavour, The Blog Affair, has been released by Decadent Publishing’s Ubuntu line – a new line that focuses entirely on African romance and stories set in Africa.

When I was in my mid-twenties, I moved to the beautiful city of Cape Town. Being single and dating gave me plenty of inspiration for a novel. Anyone who’s been on the dating scene knows that there are sometimes so many frogs out there that it should be called a dating pond rather than a dating pool! And so I decided to write a book set in Cape Town about a young woman fresh on the dating scene in this coastal city. My main character, Emma Bradshaw, has certainly kissed her fair share of frogs in life, and she decides to start a blog about these so-called “serial datists” to better understand why she keeps falling for unsuitable men… And so her online adventures begin, with consequences she would never have expected!

I am excited about the format of the book which combines blogs and instant messaging, and illustrates how technology has changed the way we communicate with each other. On the one hand, social media is a very open platform where people often reveal intimate details of their lives. There is also a more secretive side to online communication, however, where people can post their innermost thoughts anonymously. It was exciting to examine this brave new world in which we are living and to create a fun story centred on it.

Any readers out there who have ever grappled with the dating habits of the male of the species will, I hope, enjoy Emma’s story. 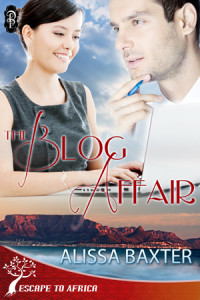 About The Blog Affair

Twenty-something South African Emma Bradshaw has a pattern of falling for unsuitable men and starts a blog about these so-called “serial datists”. Her search for new beginnings takes her to Cape Town, where she gets a job working for sexy author, Nick Reynolds. Romance with her boss is a no-no, but slowly, Nick works his way around her defenses. Trust him, or not, especially with her awful track record with men?

When an anonymous male reader of the blog challenges her on her ideas about the male species, Emma realises she must confront her past and find her true self before she can move forward…and love can blossom again in her future. 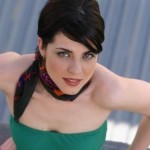 Alissa Baxter was born in South Africa, and grew up with her nose in a book on a poultry and cattle farm. After school and university, where she majored in Political Science and French, she published her first novel, The Dashing Debutante. Alissa travelled to London, England, and did an odd assortment of jobs while researching her second novel, Lord Fenmore’s Wager, which she wrote after she moved back to South Africa and settled in Durban. Alissa then relocated to Cape Town where she wrote her third novel, Send and Receive, before moving to Johannesburg, where she currently lives with her husband and two sons.

A sample from The Blog Affair

“For the past few weeks, she had been thinking a lot about changing her life, and had been toying with the idea of creating her own blog so that she could clarify her thought processes. She’d always kept a diary, and a blog, in a lot of ways, was an online diary—with the added benefit that she could interact with people online. The idea of venting her emotions in cyberspace was appealing, and in some way, symbolic of letting go…. And she certainly needed to let go.

She went through the blog registration process, and then frowned at the blank screen as she contemplated what she should write for her first post.

After a few moments, she started typing.

…A PLACE FOR YOU TO POINT OUT YOUR VIEW

The first time I ever met a serial datist, I was nineteen years old. At that age, I wasn’t capable of recognising the warning signs of this particular species of the human male. Needless to say, I got burned. Badly.

Serial datism is a concept I’ve been pondering recently. And it’s something I hope to examine in this blog. Any comments from readers are welcome, therefore, as I attempt to shed light on a variety of the dating male that has me completely bemused.

The best way to do this, I’ve decided, is to debate in an open forum—where I, and any other participants in the discussion, can flick on the switch, in a manner of speaking, and illuminate the matter.

I attract serial datists, and so it is perfectly fitting that I should introduce this topic into cyber space. But this doesn’t mean I’m an expert at identifying them. You see, the tricky thing about serial datists is that they aren’t easily defined.

They come in many shapes and sizes and forms, and they may even mutate! They can start off in one form and end up in quite another shape and size within a small space of time. And therein lies their danger.

Okay—to introduce myself. I’m Penelope (well, that’s one of my names) and this blog is called Penelope’s Pantry, because like Penelope from ancient Greek mythology, I’ve had loads of suitors in my life.

And the pantry part? Well, a pantry is a dark storeroom, and this is where I hope to stockpile my thoughts and feelings and emotions. On neatly stacked shelves, of course. I’m a fanatically neat person, and like things to be tidy.

So let’s start at the very beginning (my ordered mind demands this) with a definition of a serial datist: He is a male who, like a bee, goes from one woman to the next, landing on each female blossom for a short period of time. When he leaves, he stings them.

But unfortunately, unlike a bee, a serial datist doesn’t die after he stings. He goes on to sting again and again, and the only way to kill him is to swat him, or stomp on him with your heel. Or leave out a bowl of sugared water in which he can drown. But, on second thoughts, I think the latter technique is for ants….

Be that as it may, before anyone starts wondering whether I’m a convicted killer, I hasten to assure you I am not. I’ve certainly felt a strong desire to stomp on the various bees that have entered my life, but fortunately for these creatures, the thought of killing causes me to break out in hives. Therefore, it is only a fantasy I have indulged in from time to time.

Now that we’ve cleared up the fact that I’m not a murderer, I would like to point out that the bee who delivers his nasty stings is the real killer in the scenario. Why? Well, it’s obvious. He kills your feelings, and leaves your emotions bleeding to death. Some more pedantic readers out there might point out that bee stings don’t cause you to bleed. So what—I’m using it in a figurative sense.

But, and here I’m not being figurative at all, bees can make you swell up. Besides the fact that their stings can cause you to comfort-eat, it is possible to develop a life-threatening allergy to them. And I’m afraid that’s what’s happened to me. I am allergic to serial datists AKA bees AKA Emotionally Unavailable Men.

But I’m jumping ahead of myself. That is simply one of the categories of serial datists. According to my calculations, there are at least four others.

5) The Misogynist (before he finds a woman to control)

I will be examining each category in more detail later. But in the meantime—any comments from readers on what I’ve already expounded are most welcome.