Spotlight on: Diane Benefiel’s Shot Through the Heart

My fellow Decadent author Diane Benefiel has a new contemporary romantic suspense out, and it’s a doozy. I loved the slowly building romance and the explosive climax. Diane’s heroines are no mere damsels in distress! Best of all, it’s available as an ebook and in print. 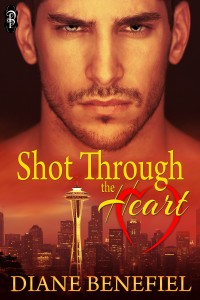 About Shot Through the Heart

Rane Smith’s nerves are nearly shot. With her ex-boyfriend, a member of a drug cartel, about to get out of prison, every instinct urges her to run as far away as she can get. But her elderly father’s failing health makes that impossible. And if the ex-boyfriend discovers her part in his conviction, he’ll have even more reason to come after her.

Undercover Seattle police detective John Garretson’s job is to find a way to get close to Rane. As her new tenant, he can sit back and wait until her ex shows up. He and his narcotics task force are on the edge of breaking their biggest case wide open and his new landlady is the key. But she’s also sexy as hell and the simmering attraction between them is distracting. Odd, she doesn’t seem the type who’d be involved in the illicit world of drug dealing….

Rane’s secrets are eating away at her and she has no interest in another relationship sure to end in heartbreak. Why won’t John mind his own business? And why, even when he sparks her temper, does she find him so appealing? When her ex’s brother, a sinister drug lord, forces Rane into a treacherous game of cat and mouse both of their lives are on the line and John’s cover may be blown. Can he save them both and put the criminals behind bars?

“Rane, you can try to kick me out, but you’re wasting your time. You’ll be safer if I stay.”

She stifled a groan of frustration.

She stood straight and looked him in the eye to make the lies more credible. “Like I said, he’s just an ex-boyfriend. He can get a little jealous. It would be better all-around if you moved out. I’m really sorry for all the trouble.”

“So, if I’ve got this straight, you have an ex who could be a threat to you. He was sitting in a car outside your house tonight. He quite possibly tried to break in a few days ago. And you want me to leave because I might be in danger? Not going to happen.” He turned to open the refrigerator.

“What are you doing?”

“Seeing what’s for dinner.” He pulled out a container, holding it up to inspect the contents. “What’s this?”

She stalked up to him and jerked the glass bowl out of his hand. “Chicken.” She shoved it back into the refrigerator and slammed the door shut. “Let’s go. We’ll go up to your apartment, and I’ll help you get anything you’ve unpacked back in boxes. I’m not feeding you dinner.”

When she would have opened the kitchen door, he shifted in front of her and grasped her arms. She wondered if the army had trained him to move so fluidly.

“Rane, think about it. We make dinner, and, from your dining table, we keep watch on the street. I want to see if he drives by again.”

“Why are you doing this? You’re crazy.”

“Not crazy. There’s just no way I can walk away with you in danger.”

She rolled her eyes. “Oh, please. You’re the one who’s in danger.”

“I can protect myself. And you should call the cops or his parole officer. If he’s in violation of his parole, he could be sent back to prison, and you’d rest easy again.” He let go of her before turning back to open the refrigerator, retrieving the chicken, and setting it on the counter. He fished around in the vegetable drawer. Tomato, lettuce, and an onion joined the chicken. “Do you have any tortillas?”

“You really are insane. This isn’t your fight. You aren’t in Afghanistan anymore.”

He turned, expression hard. “Lady, if I was in Afghanistan, that guy would be face first in the dirt with an M16 pointed at his head.” He waited a beat. “Tortillas?”

An avid reader for as long as she can remember, Diane has always favored stories with strong female characters who went on adventures and could think themselves out of the most dangerous situations. It’s no surprise that those are the kinds of books she enjoys writing.

Diane loves the outdoors and reflects this passion in her books. Born and raised in southern California, family vacations invariably meant camping in locations ranging from Big Sur to Death Valley. Her debut novel is set in a fictional town in one of her favorite areas, the eastern Sierra Nevada Mountains. Her love of travel took her to Sweden as an exchange student when she was sixteen and backpacking around Great Britain (after a week in Paris) while in college. Taking the kids on a cross country road trip would have turned out better if the last Harry Potter novel hadn’t just been released. They remember Harry searching for Horcruxes more than camping in a cornfield in Illinois.

When not writing exciting tales of women in danger, Diane spends her time at her day job (teaching US History), gardening, and bugging her husband to finish the house remodel. She is a member of two chapters of the Romance Writers of America, the East Valley Authors and the Orange County Chapter.