I have to admit that I had to look up the exact definition of succubus in order to fully appreciate the fascinating premise of Jewel Quinlan’s new short story, Surrender Sweet Succubus. Here’s Jewel with a rundown on her contribution to the Sinsperationally Yours anthology which was released November 15, 2013 from Hot Ink Books. 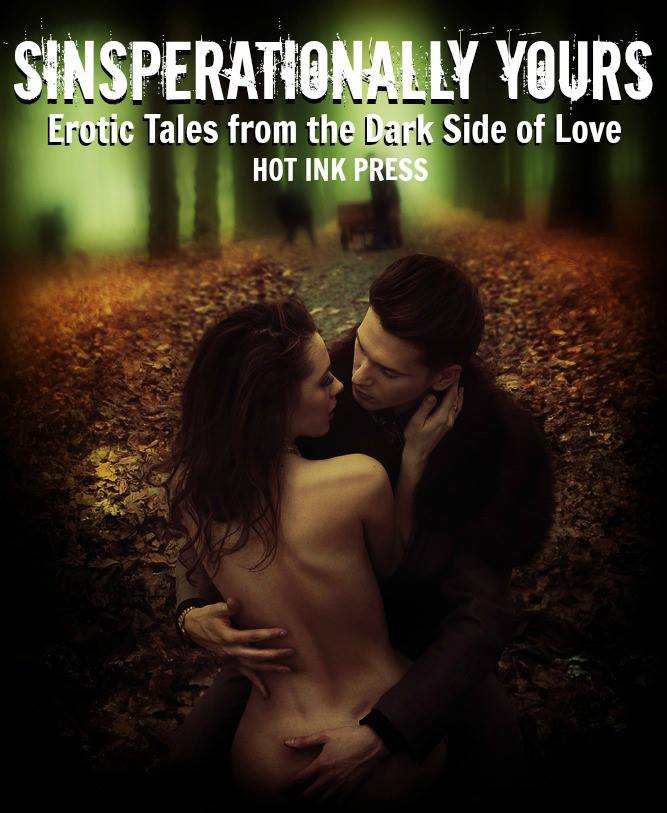 About Surrender Sweet Succubus – When Dr. Stephen Wallace, a fertility specialist from Sydney Australia, is approached by his brother and sister-in-law for help conceiving a child there is no way he can refuse. Since they have already exhausted all the possibilities modern medicine can provide, Stephen turns to his skills as a shaman for alternative solutions. His search leads him to Las Vegas, Nevada on a slim lead to capture a succubus who he hopes has the power to help. But when he meets Geneva, the exotic and passionate succubus, he finds himself being captured instead.

About Sinsperationally Yours – Welcome to the realm where sins, desires and love collide with all things that go bump in the night. Where tales of lust are flavored with a happily ever after or a happy for now. Ghosts and Vampires and Werebears oh my! Immortal heroes and heroines who strike fear in those they meet but also ignite passion and desire—Sinsperationally Yours.

A peek inside the Surrender Sweet Succubus

“I came here because I was looking for a succubus…” he began.

He lost his train of thought as she rolled a tube of lipstick over her lips. The same lips that had been wrapped around his cock last night doing the most wicked things to him.

She finished and started to walk back into the bathroom but her feet stopped short just before the door as if she had hit an invisible barrier. The look on her face was almost comical.

“What the…?” She backed up a step and then tried to move forward again but was halted once more in the same place. She reached in front of her and grabbed the doorway then tried to pull herself through but from the waist down, nothing else moved.

“What the hell is going on?!” She sounded scared now.

He stood. It was working, the binding spell was working! “Okay, I don’t want you to get upset but I put a binding spell on you.” He couldn’t help feeling bad about it. It wasn’t really in his nature to cast such spells but it had been necessary.

“You did what?” Her tone turned to acid and her eyes narrowed.

“A binding spell,” he repeated, “So you can’t go more than three yards away from me. Sorry, were you trying to go to the bathroom?”

He moved closer to give her more slack so she could go in. She stumbled slightly as the perimeter of the bind shifted. She straightened, looking even more upset, and moved away from the bathroom towards the front door.

“How dare you!” she raged. “I am not to be held in bondage by any man. Release me at once!” Her hands scrabbled at the door behind her for the knob.

“I’ll remove it I swear! It’s just, I need your help with something and I didn’t want you to disappear. I wasn’t sure how you would react when I told you I knew what you were.”

“You think I’m going to help you now!?” She looked like she would hit him if she could. Her eyes blazed emerald fire.

“I think, when you listen to what I have to say, you will.”

“And what if I don’t want to listen? You’re going to force me?”

He started to negate it but then stopped. She was right. The look in his sister-in-law’s eyes had haunted him since they’d spoken. He couldn’t let her down. Couldn’t let them both go on with the heartache of being childless. He shook his head, not knowing what to say.

“That’s it, I knew it! You men are all the same. You just take what you want and bend other people to your will.”

He held his hands out to her in pause. “Now look, I don’t even know if you can help me. I just wanted the opportunity to discuss it with you. That’s all. But before we do there’s something else I have to tell you about.” Better to come clean right away. He slowly inched forward towards her.

She yanked the door open. “I don’t care! Whatever it is, I’m not doing it you jerk!” she said, turning to go.

He quickly called out, “I just wanted to be honest and tell you…”

She took one step and then crumpled into a heap on the carpet.

Where to buy: You can get it in print or Kindle edition on Amazon or add it to your list on Goodreads.

From a young age, Jewel Quinlan had an abundant imagination and strong desire to write novels.  She particularly enjoys writing paranormal and fantasy romance. An avid traveler, she has visited fifteen countries so far (which she enjoys using as settings in her novels) and has plans to see more of the world. She has a particular fondness for Bavaria and studies the German language as one of her hobbies. During the day, she works as a pharmaceutical sales representative and, at night, she writes romance. She currently lives in Orange County, California with her two dogs; Shimmer and Penny.