Spotlight on: Tara Andrews’s Her Everything 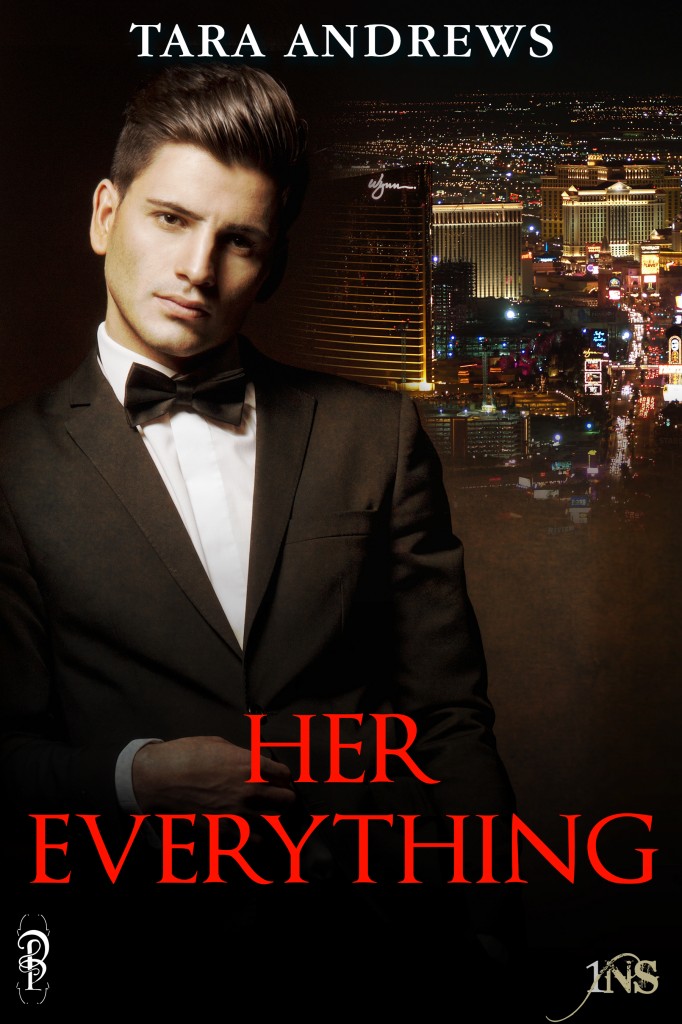 Rachel Turner made a mistake—a couple, in fact. Ruining a surprise meeting with the front man to her favorite band is just the beginning. But agreeing to switch places with her famous sister may spell the end of both of their careers. With rumors flying and an unexpected invitation from Madame Eve, Rachel hopes she can put the mistakes behind her.

Attending an event to support a charity close to his heart, Mark Travis wasn’t looking for love, or even company—and definitely not with a fan. But when he puts in a hasty bid at a silent auction and wins the services of 1Night Stand, Madame Eve has something different in mind. A single evening with a woman she claims can fulfill his needs. But one night might not be enough.

Come morning, will Mark and Rachel’s unexpected one-night stand give them more than they bargained for?

Enjoy an excerpt from Her Everything

On the dance floor, Mark tugged her waist to pull her close. With one hand clasped in his and the other resting on his shoulder, she followed his lead. He danced with the same confidence and style as he walked—sure, commanding, and…so incredibly hot.

Thanks to the four-inch Louboutins Rachel had borrowed from her sister, the top of her head barely reached his chin, but high enough, if she dared, to rest her temple against his cheek. Though tempted to find out if the stubble along his jaw was as soft as it looked, she didn’t dare. But, oh, how she wanted to. At least they were close enough that the spicy scent of his cologne surrounded her.

A love song played, its lyrics about longing the perfect fit for her one-and-only dance with the man she’d admired so long from afar.

“You didn’t come back.” His voice, rough and low, vibrated against her cheek.

She tilted her head to meet his gaze. The intimate proximity allowed her an up-close-and-personal view of his brown eyes, their color reminding her of the amaretto she favored.

His hold on her shifted, bringing them closer, the difference slight, but welcome. The nerves at her waist sizzled under the weight of his palm, while his thumb rubbed the exposed skin of her back. She shivered again from the simple touch, and an answering heat flared in his eyes.

“I…I got called away to help my sister.” She stumbled on the near lie. But, truth be told, she never dreamed Mark would give her a second thought after she’d left, his disinterest so plain to see.

Rachel allowed him to spin her before replying. “That’s correct.”

“I didn’t realize at first. The glasses threw me off, as did your hair.” He smiled then. “Even so, you two are not identical.”

Aside from her and Sasha’s obvious style differences and voices, very few people were able to tell them apart. A knot formed in Rachel’s throat. She didn’t like where his comment appeared to be leading or the way his movements slowed and his brow furrowed.

He met her eyes. “Was that you on stage tonight?”

Tara Andrews divides her time between a full-time job as an office manager, an even more full-time job as a wife and mother, and her dream job as a romance author.  An avid reader and writer, Tara continuously seeks to hone her craft in order to provide readers with stories that are provocative yet romantic.

As she has learned from her own experiences, dreams do come true and women can live happily ever after. Tara strives to infuse a blend of fantasy and realism in her stories in order to connect with readers’ own experiences, hopes and emotions.