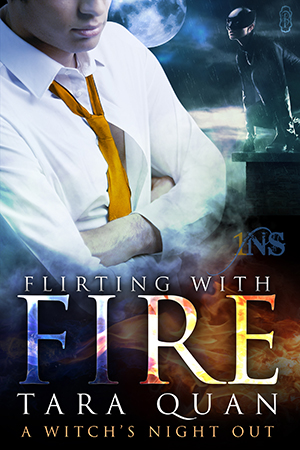 I’m so excited to have Tara Quan here to show off her new paranormal romantic comedy, plus there’s a gift card giveaway! Welcome, Tara.

I owe my lovely hostess a huge thank you for having me over today. My paranormal romantic comedy, Flirting with Fire, was just released by Decadent Publishing. It features a clueless fire mage, his fed-up cat familiar, and Madame Eve’s renowned one-night stand service. On All Hallows’ Eve, this witch and warlock iron out the kinks of an outdated employment contract in a spectacularly fiery fashion (and once you read the blurb, my very odd description will make a lot more sense).

In celebration, I’m giving away a $15 gift card. To enter, leave a comment here, and drop your details in the Rafflecopter widget (at the bottom of this post, assuming the code works, or at my website: TaraQuan.com/FlirtingwithFire)

Flirting with Fire (A Witch’s Night Out, 1)

Apprentice witch Catalina Gato is prohibited from assuming her human form in front of her new employer without his express permission. Since he doesn’t know he’s a warlock, he can’t give it, leaving her in a familiar’s limbo. To make matters worse, she’s barred from leaving his house, and her attempts to enlighten him of his true nature results in burnt notes, charred walls, and exploding laptops.

On All Hallows’ Eve, she gets one night of freedom. Deciding some no-strings-attached sex might take the edge off the intense attraction she feels for her clueless boss, she signs up for Madame Eve’s service. When she meets her masked mystery date at the Castillo Capital, she realizes she might have gotten much more than she bargained for.

After being gifted a one-night stand from his annoying best friend, attorney Leo Difuoco reluctantly ventures to the Castillo Capital to celebrate Halloween. When he meets his oddly familiar green-eyed date in a Cat Woman costume, flames literally ignite, sparks magically fly, and life as he knows it changes forever. 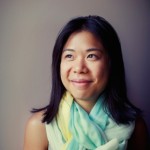 Globetrotter, lover of languages, and romance author, Tara Quan has an addiction for crafting tales with a pinch of spice and a smidgen of kink. Inspired by her travels, Tara enjoys tossing her kick-ass heroines and alpha males into exotic contemporary locales, paranormal worlds, and post-apocalyptic futures. Armed with magical powers or conventional weapons, her characters are guaranteed a suspenseful and sensual ride, as well as their own happily ever after. Learn more at www.taraquan.com

Excerpt from Flirting with Fire

Not bothering to close off the room, Leo hooked his fingers under his boxers’ waistband. “You’re a little pervert. Can’t you at least act like you’re not looking?” Very few sane people had lengthy conversations with their pets. He needed to get a life.

His audience of one lay down on her stomach, her face resting on her paws. The first couple of months, she’d pretended to be interested in something else— his assortment of fluffy white towels, for example. Now, she watched him shower like it was nobody’s business. Sighing, he took off his shorts and tossed them into the hamper, his aim perfect enough to remind him of his basketball-playing days. She meowed and nodded, as if in approval.

He stepped into the glass enclosure, feeling oddly self-conscious. With a twist of the handle, water fell like rain over his head. As he scrubbed, he continued to address the cat. “I’m going out tonight. It’s Halloween, and the guys are beginning to think I’ve turned into a hermit.”

The ensuing meow was pitched higher than usual. Though he hesitated to read too much into feline noises, his brain somehow interpreted the sound as an expression of enthusiasm. The plan he’d been lukewarm about gained appeal. “Besides, costume parties are great places to pick up chicks.”

He cringed at a loud crash. Poking his head out, he took stock of the damage. Ceramic shards from what used to be his soap holder covered the floor, along with globs of shiny translucent liquid.