Top Ten Tuesday is a weekly meme started by The Broke and the Bookish. Here’s their list, and a list of all the other participating bloggers. I’ll bet there isn’t much overlap between any of the hundreds of lists! 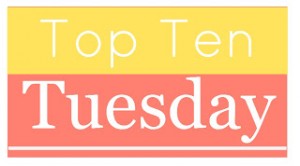 *The above links are to Amazon, for which I am an affiliate. Read more at this site’s Privacy Policy.