Watching TV without a TV

I don’t have TV. I have a television, yes, but no cable. Yet, I watch plenty of hours of TV per week via Netflix, Hulu Plus, Amazon Instant and the occasional (annoying) network video player (CBS I am talking about you). As much as I love not paying for cable, and having the flexibility to design my tv watching around my schedule (and by schedule I mean my toddler’s naptime and bedtime), sometimes I miss sitting down at an appointed time to watch a particular show that I know all my friends are watching at the same time as me, and we’ll discuss at length the day after. Okay, that hasn’t happened since high school and Dawson’s Creek was the most thrilling thing on television to a sixteen year old girl. But nowadays, through the power of instant messaging, at least I can prod my sister to watch the new Castle on Hulu so we can discuss via text. It’s sort of the same thing. This fall I’ll be watching Scandal sort of in real time, having watched the entire first and second season this summer. I’m also in for New Girl and The Mindy Project, my comedic palate cleansers after all the angsty drama between Olivia Pope and Fitz. What television shows are you committing to this season? 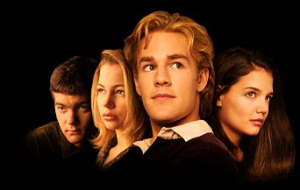 Why does the cast of Dawsons’ creek look like the poster for a prep school horror movie here?